AP’s own Evan Moreau finished the IMTUF 100 race in McCall, Idaho recently and placed 16th overall with a time of 26:31:09! Congrats, Evan – what an accomplishment! Congrats to AP’s Own, Evan Moreau on a Strong Finish in the 2021 Footzone’s Dirty Half Marathon!

The 20th annual Dirty Half Trail Race was on the Phil’s trail system, located on the West side of Bend, and entails about 1,000 feet of elevation gain and 13.1 miles of trail. Evan had a great day, finishing 7th overall out of 626 starters and his second fastest all-time half marathon at 1:29:24! Up next, Evan will be in Colorado helping his friend finish the Hardrock 100 in July, prepping for his big race in September, a 100-mile event in Ashland, Oregon. Great job Evan, all of us at AP are rooting for you! The Bend Criterium Series, presented by Allegiant Partners, is Wednesday, 06/19! The series runs every Wednesday evening from 06/19 to 07/17 around Pacific Crest Middle School in Bend.

Check out the website for start times and to pre-register for the series for $60 (Day-of registration is $20). Also: thanks to Dr. Todd Schock, juniors race free if they pre-register! Other generous sponsors include Deschutes Brewery, (Ryan) McGlone Properties, Galanda Broadman, Crow’s Feet, Pine Mountain Sports and Bend Cryo and Recovery.

If you can’t race but still want to be involved with the Bend Criterium Series, please volunteer! I’ve only filled 28 percent of my volunteer slots, which are about 3-4 hours long. For the upcoming 06/19 date, I still need two corner marshals to keep racers safe. Will you donate an evening to Bend bike racing?

New this year are the two dates, June 26 and July 10, on which women 1/2/3 will race with men 3! Women will be scored separately and also with men — the separate co-ed podium (which pertains to the two co-ed races) will be awarded at the series’ finale, July 17. As a men 3, I’m really excited to race against the fastest women in Bend! 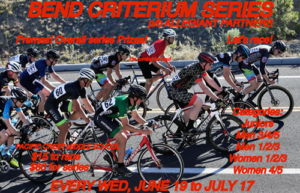 Around 2012 when we needed a new website we hired babaLucas Creative (bbL) to build the site. bbL built and maintains what is now the third iteration of worktruckdirect.com, along with our other portfolio of sites.

In 2015 the founder of bbL, Rob Balucas, suffered a severe cycling crash while training for the IRONMAN 70.3 Santa Cruz. Falling 20 feet over the side of a hill, he suffered a spinal cord injury leaving him in wheelchair. While in the ICU for weeks at the hospital, Rob had a panoramic view of the hill he crashed on. Staring out at that hill he decided to do a triathlon within a year. Utilizing a handcycle and a racing wheelchair, he raced in three that next year. 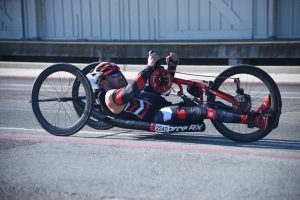